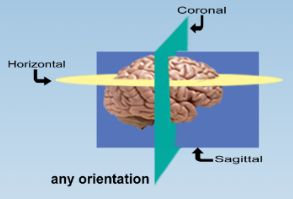 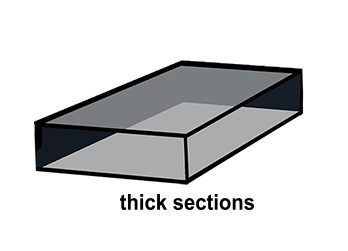 The Euler number is a geometric measure that can be obtained when focusing through three dimensional objects. Three types of events go into the Euler number; islands, bridges and holes. The islands are the separate parts of the object that are encountered in two dimensions while focusing through, as the bridges are extra connections among the objects and holes are completely enclosed cavities.

Connectivity in a Trabecular Network such as Spongy Bone

Connectivity in a trabecular network is defined as (2 – χ3), if an object has no completely enclosed spaces (has no H’s) (Gundersen, et al., 1993). This is useful when studying structures that are arranged like honeycomb, for instance spongy bone, also called cancellous or trabecular bone. If you looked at a two dimensional cross section through a network structure you will see what look like isolated objects; we know they are interconnected in one network, but they look isolated when viewed in cross section. In order to identify islands and tell them apart from bridges, there must be at least two physical or optical sections right next to each other that can be observed and compared. Therefore a disector is used, and as always for an unbiased probe, systematic random sampling must be used. Two focal or physical sections are compared. If the object is present in one section but not in the next, it is an island. If the object is present in one plane and partially present in the next plane, in other words it has a break in it in the next plane, it is a bridge.

If you look at a honey-comb structure like cancellous bone in cross section, W can be thought of as how many pretend connections you would need to go from one isolated part to another and another until you have ‘visited’ all of the isolated parts (Gundersen, et al., 1993, Fig. 3).

Connectivity in a Multiply Connected Network such as Capillaries

In a multiply connected network, like a capillary bed, connectivity is defined as (1 – χ3). In this case the topological definition of connectivity is the maximum number of cuts in the network that could be made without separating it into two nets (Nyengaard, 1999, Fig. 10).

The Euler number can also be used to estimate the number of separate particles in a system. A disector on pairs of contiguous sections and systematic random sampling are used. If you are counting particles that don’t have concavities, such as most cells, there will only be islands that are encountered:

this is the same as estimating with the physical fractionator (if you use thin sections) or the optical fractionator (if you can get thick sections) and is not really a connectivity probe. In this case Q– is equal to χ3. But if the particles do have depressions in them, then bridges can be encountered, and we don’t want to mistake the leading edges of one particle with a dimple as the leading edges of two particles so:

will take into account the connectivity of the particles avoiding an overestimation. Once Q– is counted either the fractionator or the NvVref method may be used to come up with, respectively, the total number of particles or the numerical density of particles.

Estimating the Number of Alveoli in Lung

When estimating the number of alveoli in lung, it is hard or impossible to spot an island in an air-sac, so mostly bridges are encountered and:

This is the same as using the physical fractionator, but instead of counting islands, you are counting bridges to arrive at Q– .