Quantifying surface area is not as common for Neuroscientists as number, length and volume. To many researchers who study other organs, such as kidney, placenta and lung however; surface and sometimes surface area per volume are very important. Since what we are looking to characterize is a plane, the most efficient probe to use are line-segments. The key relationship for surface estimators is:

To estimate surface area, the orientation of some combination of the tissue and the probe must always be isotropic, i.e., random in three dimensional space. If the surface and the lines are perpendicular to each other, there will be the maximum amount of intersections, and if they are parallel, there will be a minimum number of intersections. We wouldn’t want a condition where, for example, the lines we are probing with are always perpendicular to the object whose surface area we are looking for, or we would overestimate the surface area. 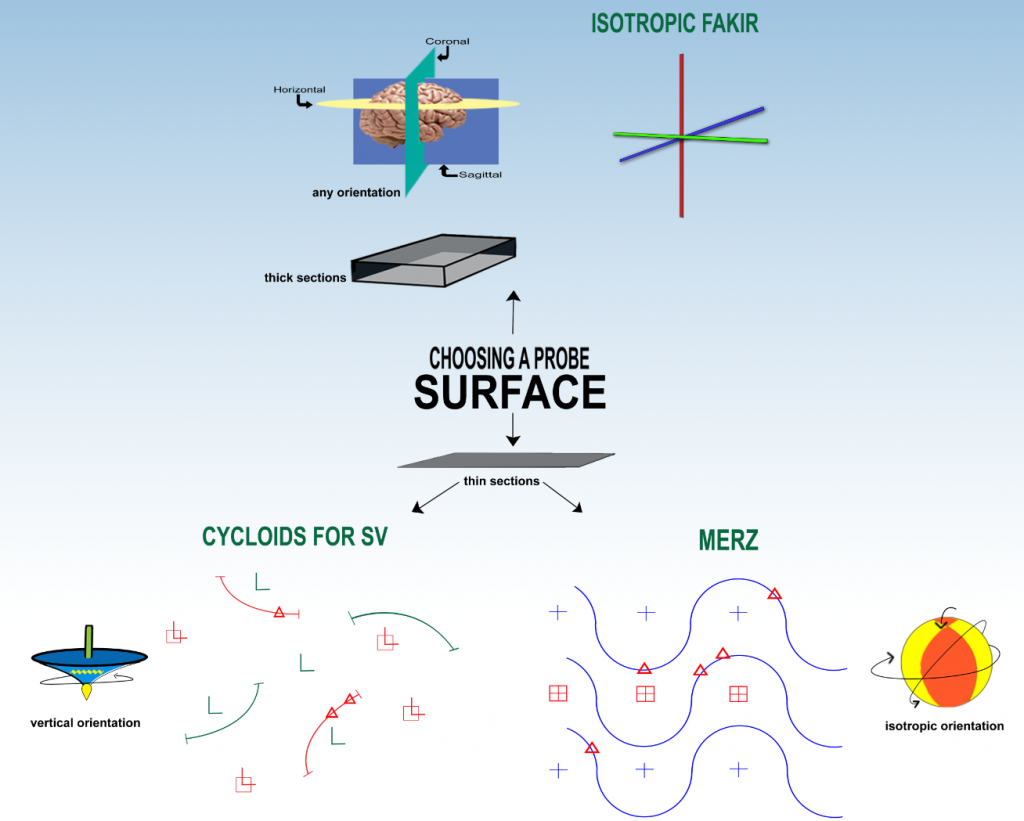 When you are estimating surface area, if at all possible use thick sections. This way you can use the Isotropic Fakir probe (Kubínová and Janácek). The probe itself is isotropic; it consists of lines in all three orientations, so you can use tissue that is sectioned and oriented in any way, including preferentially. This probe can be used with the fractionator method or the NvVref method (see fractionator vs. NvVref). If you need to report your estimates as area per volume instead of area per region, you could get the volume some other way, for instance estimate it with the Cavalieri/point-counting probe. The formula to arrive at an estimate for surface using the isotropic fakir probe is:

If you can’t obtain thick sections then it will be impossible to use a probe that is intrinsically isotropic, but there are two methods you can use to otherwise assure isotropy with the tissue. One is to obtain vertical sections and use the Cycloids for Sv probe (Baddeley, Gundersen, and Cruz-Orive), that uses the NvVref method to estimate surface area per volume. Since two planes have been randomized, straight line-segments cannot be used. To make up for the lost degree of freedom a special type of line segment called a cycloid is used to probe. The direction of the vertical axis dictates how the cycloid line-segments are laid down, so this must be known and indicated before the cycloids are generated. Here is the formula for the estimation of surface when a system with two points per unit of cycloid is used:

In this case there are two points for every cycloid so ‘2p’ is used.

The second method to obtain surface area estimates from thin sections is to use isotropic sections. Use the Merz probe (Weibel, 1979, section 8.8, Robert K. Schenk, Bone tissue; also see Howard and Reed, 2010, equation 6.4). It has half-circles (Weibel circles) so that you can mark their intersections with the surface to get an estimate of surface per volume: 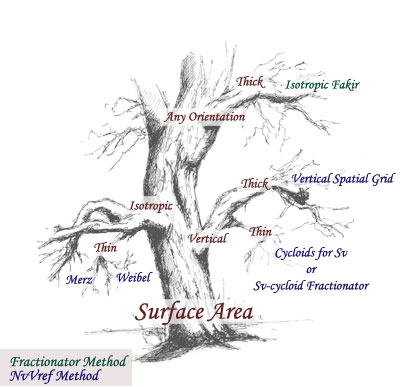 The isotropic fakir probe is the best to use for surface estimation, it requires thick sections but can be used on tissue that is preferentially oriented.

If you have vertical thin sections, you can use the Cycloids for Sv probe (Baddeley, Gundersen, and Cruz-Orive), or better yet, the Sv cycloids fractionator probe that will help with the systematic random sampling but still uses the NvVref method, just like Cycloids for Sv, to estimate surface area per volume, or the vertical spatial grid (Cruz-Orive and Howard) to estimate the surface area. Both of these probes make up for the fact that the orientation of tissue in vertical sections has only two random planes. It’s probably always better to use Isotropic Fakir (see above) then Vertical Spatial Grid or Cycloids for Sv, since it’s much easier to prepare the tissue and because it uses the fractionator method to estimate. If you need to estimate surface area per volume, it may be an option to use Cycloids for Sv instead of an Isotropic Fakir/Cavalieri-point-counting combination.