Random sampling was used to obtain columns of tissue from placentas. A single thin section was taken from each column for systematic random sampling at the section level. Cavalieri-point-counting estimated the volume of the placenta (reference volume) and also the volume fraction of placental components. The volume fraction was multiplied by the reference volume to get the volume of the different types of tissue that make up the placenta. This volume probe was run at the same time as a probe for the length of the distance from villi surfaces to fetal capillaries (diffusion distance) and also another probe for amount of branching of the villi. 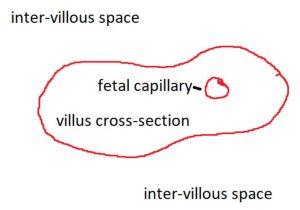 For the purposes of illustration, lets say the above drawing of a villus cross section contains only one cross section of a fetal capillary. Counting frames were superimposed. 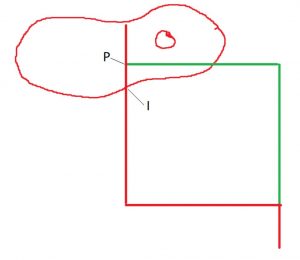 Above is an example of a counting frame superimposed on the cartoon that represents a cross-section of a villi. For Cavalieri-point-counting, the upper left corner of the counting frame is the point used for point-counting (P). This point is marked for all counting frames according to what component of the placenta it is marking. All points are multiplied by the area each one represents to estimate the area of each section; and those section-areas are multiplied by the section thickness and interval to arrive at the unbiased estimate of placental volume. This reference volume is multiplied by the number of markers indicating a given component divided by total number of markers (component volume fraction), to arrive at the volume of the component, e.g. the volume of contractile and the volume of non-contractile villi. For efficiency, this group combined this volume probe with a probe for the length of the diffusion constant. To sample in an unbiased way, they designated one of the sides of the counting frame to be the probe to decide where to make a measurement (in the above example it is the vertical red side of the counting frame). If the side goes through the surface of a villi cross-section (I), that is where a measurement is taken. You could use more than one side if you need more samples. 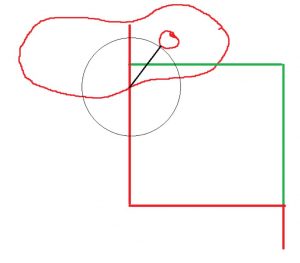 Next a line segment is traced from (I) to the nearest capillary in the villus, to measure the shortest distance from the maternal blood in the intervillous space to the fetal blood in the fetal capillary (we are pretending like this one cross section shown is the closest capillary for this example). The nearest neighbor probe was used. This is a good alternative to the orthogonal intercepts probe. For the branching index, the observer scores the (I) as either concave or convex to calculate the fraction of concave intersections; more concave intersections is considered to mean more branching (Barapatre, 2021, p. 7 second paragraph). The method described in this paper is a great example of using simple, unbiased, stereological probes that are combined for efficiency, to get unbiased data that in this case show growth restricted placentas are not just less in volume, but also morphologically different than placentas that were not growth restricted.