The authors of this manuscript (Many et al., 1986) used unbiased stereology along with autoradiography to look at microscopic changes in the hyperplastic thyroid gland of the mouse. Morphological parameters examined were percent by volume of colloid, percent by volume of the cuboidal epithelium that surrounds the colloid, number of follicles, radius of the follicular lumen, and height of the cuboidal epithelial cells. After low iodine diet, the morphology of a hyperplastic goiter was present (Many et al., table 1). Thyroid weight went up. The percent of the thyroid volume made up of colloid went down while the volume fraction and height of the cuboidal epithelium increased. Morphology returned to normal when moderate levels of iodine were reintroduced to the diet. But when rich levels of iodine were reintroduced instead, the morphology came to resemble a colloid goiter. Thyroid weight remained high, but for different reasons. The volume fraction of the colloid went up even beyond control levels and the mean number of follicles increased, while the epithelial volume fraction and height decreased. The percent of follicles that showed decreased uptake of radioactive iodine also increased as compared to control groups when the mice were reintroduced to rich levels of iodine.

The methods section (Many et al., 1986, p. 638, Stereological procedure) records that all techniques were as described before in a paper from five years earlier (Denef, et al., 1981, p. 2353, Morphology and morphometric analysis, second paragraph). Point counting is used to estimate the volume fraction (percent by volume) of the colloid and epithelium (Area Fraction Fractionator). This probe is a well-established, good choice to use to estimate volume fraction.

There is no explanation of how follicle number is estimated in either paper. Most likely, cross sections of follicles were counted. This technique, carried out on single thin (one micron) sections, is biased; a leading edge must be identified in order to count particles without bias, and therefore a three dimensional situation is required, meaning a disector must be used. To estimate the number of follicles using unbiased stereology, the physical fractionator could be used (Fig. 1). Thin contiguous sections are compared and if a cross-section of a follicle is present in the first (reference) and also in the second (lookup section; blue arrow shows direction of counting) section the follicle is not counted (two examples are shown in Fig. 1). But if the follicle is present in the first but not the second cross-section, the leading edge of the follicle has been found and it is counted (see follicle labeled ‘counted’ in Fig. 1). A problem that may arise is that there may be no way to know if the second cross section is part of the follicle detected in the first cross section or if it is part of another follicle. This is because the follicles are packed in so tightly together. Therefore it may be better to use the optical fractionator (Fig. 2). Instead of two thin sections as for the physical fractionator, a thick section is used. If estimating the number of cells a section about thirty microns thick and an oil lens that can resolve very thin optical planes are used. For these larger particles that are much bigger than cells, a 40x air objective used on a thicker section will give a thicker focal plane (Fig. 2), appropriate for finding the tops of follicles but too thick to resolve the tops of cells. 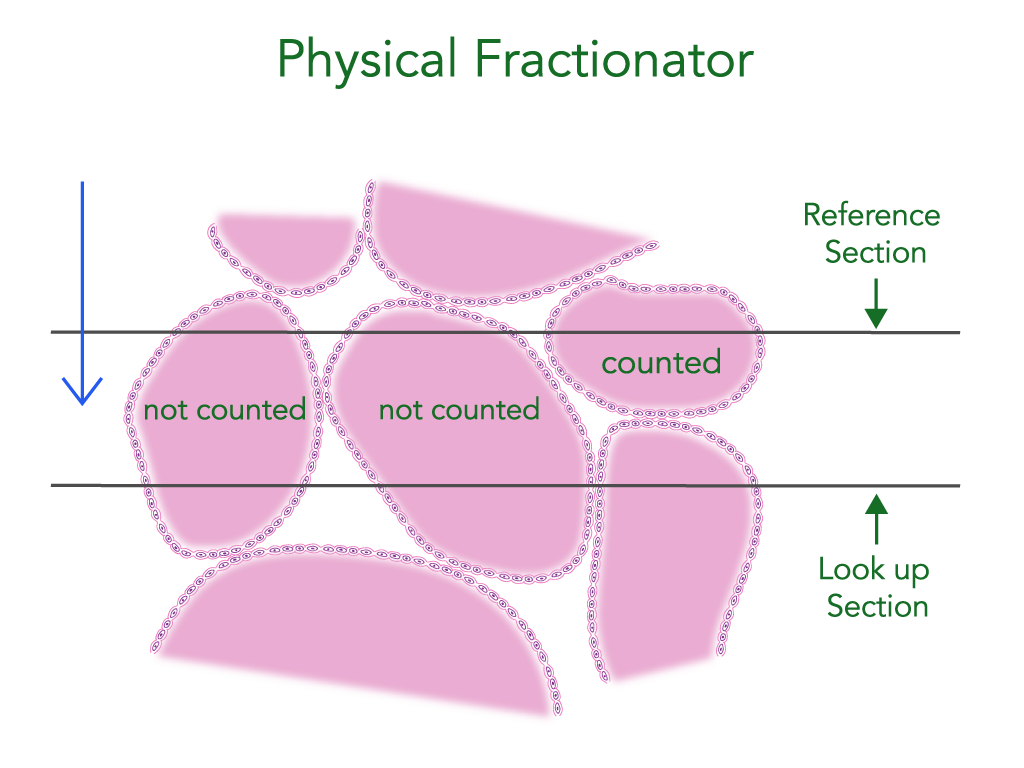 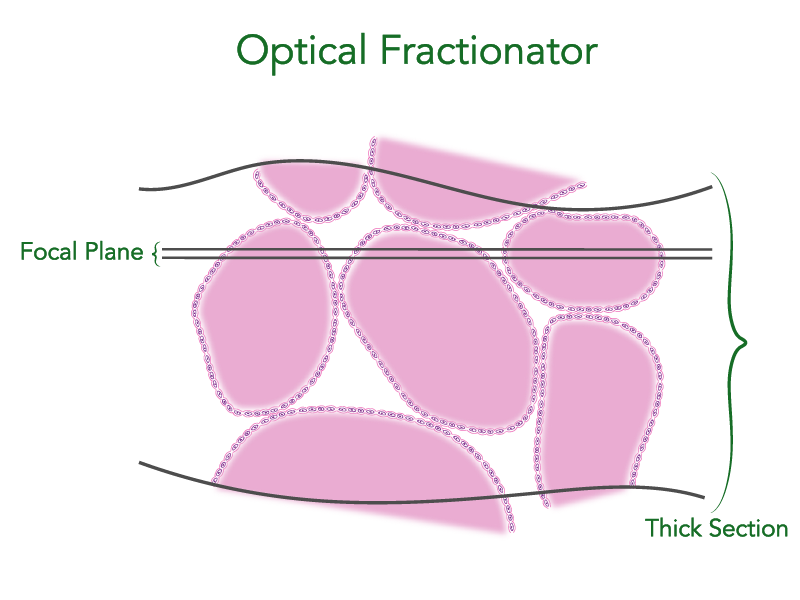 There is also no mention in either paper of how cross sections were picked for the measurement of their radii. This assay could be replaced by the nucleator that we recommend for estimating the volume of the individual follicles. The probe requires isotropic sections unless it could be shown that the follicles themselves are arranged isotropically. It needs to be used in conjunction with a disector and it can be carried out locally while the optical or physical fractionator is being used globally. Systematic random sampling is used as it usually is with all unbiased stereology probes.

This paper (Many et al.) demonstrates a difference between the microscopic morphology and metabolism of the thyroid gland when a low iodine diet that causes a hyperplastic goiter is changed to either a moderate or rich iodine diet. The qualitative conclusions regarding volume fraction are evident from the photomicrographs and the quantitative conclusions regarding volume fraction can be trusted to be free of bias based on the point-counting technique used (Area Fraction Fractionator). Statements regarding quantitative changes in the height of the epithelium however would be stronger if the unbiased stereological probe used was better identified. Qualitative and quantitative results regarding the number of follicles are subject to bias here, specifically over-counting, as a disector was not used (Physical Fractionator, Optical Fractionator). 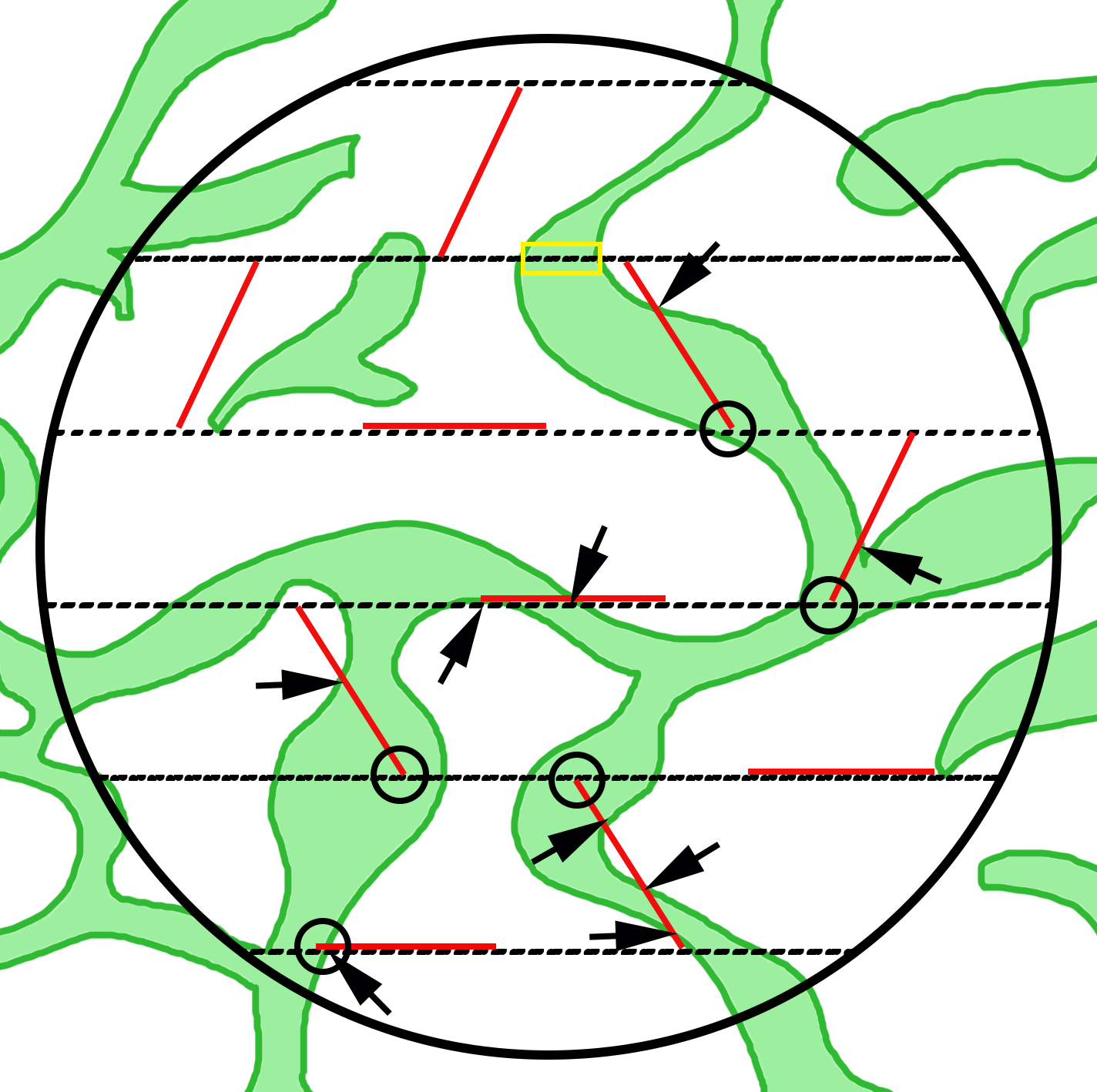 (after Many et al., Fig. 8) In this diagram the membrane or slab of tissue whose thickness we are estimating is green. Measuring line segments (shown in red, note that their endpoints form a hexagonal point network) are superimposed on the tissue to estimate the arithmetic mean thickness:

In the same lattice, dotted lines are superimposed on the tissue (dotted lines are horizontal and black) to be used in estimating the harmonic mean barrier thickness: the number of dots that traverse each membrane thickness is used to estimate the length of each transverse (for one example, see the yellow rectangle):

For a more modern probe that has been used to estimate membrane thickness in placenta and lung, please see Orthogonal Intercepts.