Particles can be sampled for unbiased estimates of surface in a number weighted, volume weighted, or surface-weighted manner. 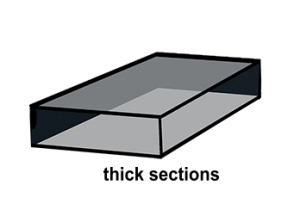 To estimate the surface of particles or spaces with the optical rotator (Tandrup, etal., 1997), isotropic, thick sections must be used. For details of the mechanics of the probe, please see optical rotator to estimate particle volume, but instead use this formula:

a = density of probing lines

lj = number of intersections of probing lines with the surface

d2 = the shortest distance from the grid line on the cross section to a unique point in the particle (Tandrup, etal., 1997, Fig. 2) 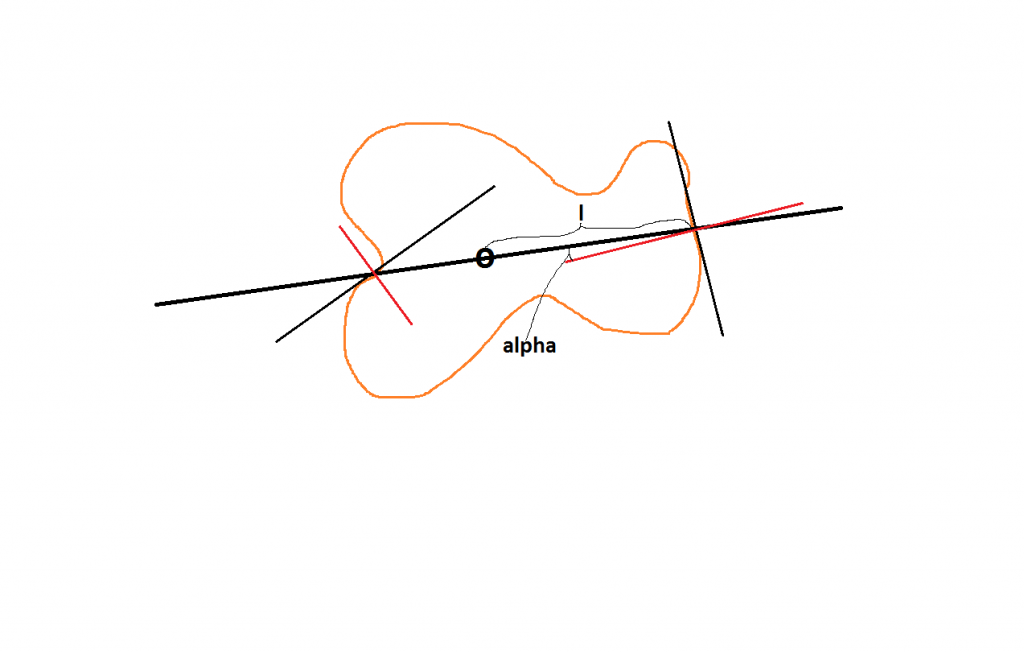 Then a ray, l, is drawn from the unique point to the boundary. In the figure above two rays have been drawn one-hundred and eighty degrees from each other for efficiency. Three or four rays could have been used for more precision. The line segment from the unique point, o, to the boundary on the right has that distance, ‘l’, labeled. The thinner black line shows the tangent where ‘l’ hits the boundary, and the red line is perpendicular to the tangent. The angle, alpha, is between the normal and ‘l’. The second line segment extends from the unique point, ‘o’, and goes to the boundary on the left. Notice that the angle between the normal and the line from ‘o’ to the left boundary is greater than alpha on the right. This means there will be more surface area at the left intersection than the right intersection. If, unlike the figure, only one ray is used, the formula for the surface estimate is:

β = the angle between the intersection of the surface and a plane that contains ‘l’, and ‘l’ (please see Jensen and Gundersen, 1987, Fig. 1 to understand how α is related to β)

If more than one ray is used (e.g., in the figure above, two are used) the formula for the surface estimate is:

The idea is to use two arrays of cycloid lines that are perpendicular to each other and have the minor axis of the cycloid lined up with the vertical axis (Cruz-Orive and Howard, 1995, fig. 3). Start with systematic random sampling so that you have a series of thin sampling planes. It will be easy to mark the intersections (I) of the cycloid lines that are in the XY plane with the line that is created by the cross section of the surface of the particle. Those intersections are called Ixy (Cruz-Orive and Howard, 1995, fig. 2b and 2c, where the cycloid intersects the boundary of the particle). 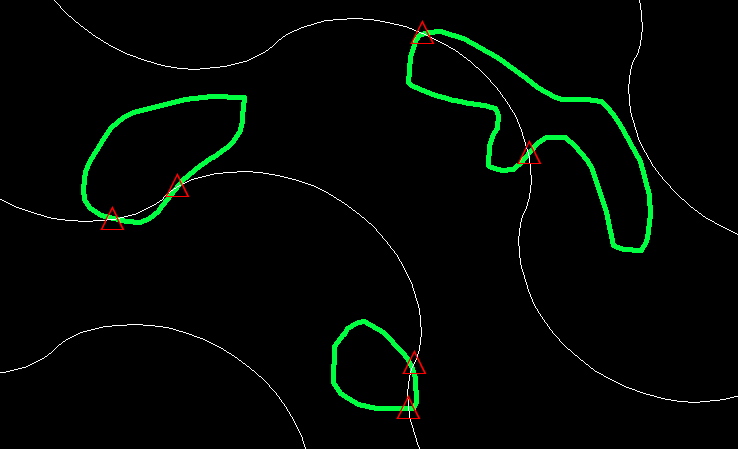 In the figure above, the vertical axis direction had already been indicated and the cycloids are laid down with their minor axes aligned with the vertical direction. The red triangles indicate Ixy, the place where the surface of the particles crosses the lines. But we can’t see the cycloids in the XZ plane as lines because they are coming in and out the plane of section and would appear as points. 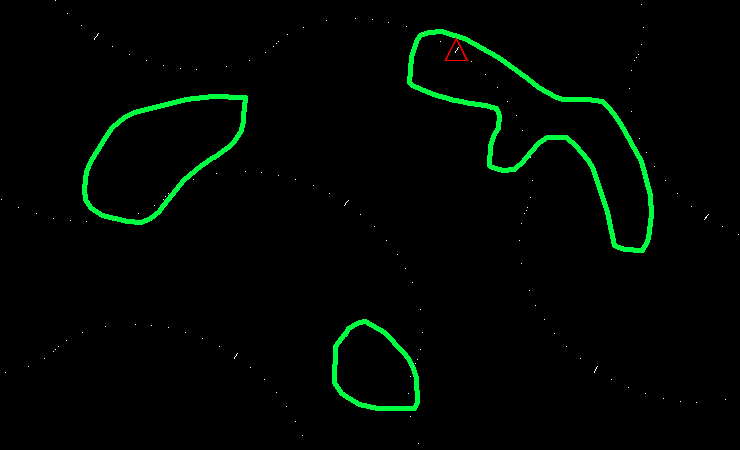 So points along the XY cycloids (now dotted) are shown that represent the XZ cycloids (dashes along the dotted lines). If one of these goes through the particle it is marked (see red triangle above) indicating an intersection that will be used to calculate the number of Ixz. The points also can serve to estimate the volume of all of the particles. 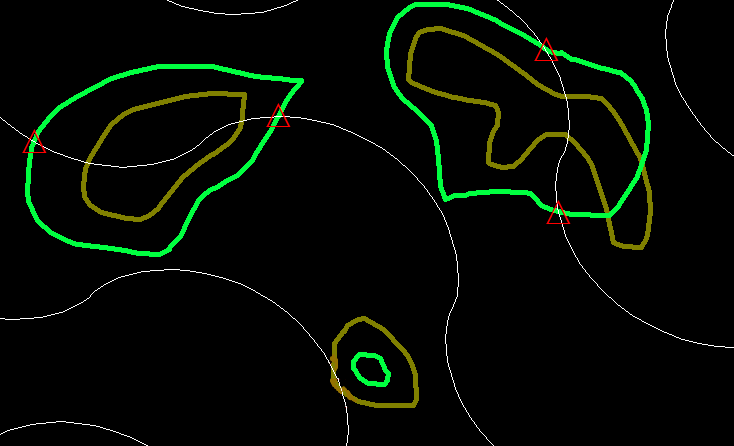 Again, it is easy to mark the intersections of the cycloids in this XY plane with the surface (red triangles above) to get Ixy. But to get Ixz we have to look at points, and to further complicate things, the lines are cycloids, not straight. This is why the XY grid of cycloids has been vertically shifted upward compared to where it was at the last focal plane (compare how the cycloids go through the yellow cross sections above to the green cross sections in the first image above). They are shifted (Cruz-Orive and Howard, 1995, pg. 149, second column) to follow the cycloids that are in the XZ plane as we focus up and down. Now we mark the points that will help calculate Ixz as well as be used for a volume estimate. 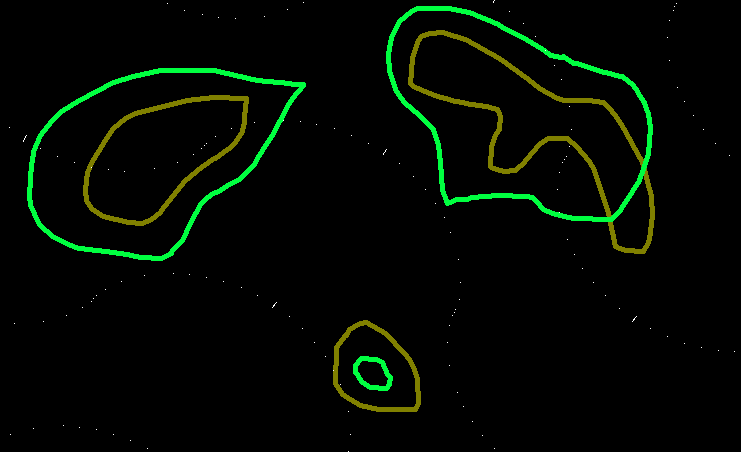 In the case above, none of the dashes on the white dotted cycloid-lines fall inside the cross section, so nothing is marked. The program will keep track of how many of these points were the same points that were counted in the previous sampling plane. This is  Pi,i+1 (Cruz-Orive and Howard, 1995, Fig. 2), that in turn is used to calculate the number of intersections in the XZ plane:

S = the estimate of surface area for all the particles

a = test area per test point

We are also reminded that we can calculate a volume estimate using the Cavalieri/point-counting estimator:

a = test area per test point